This research addresses the problem of temporal pattern discovery in real-valued, multivariate sensor data. Several algorithms were developed, and subsequent evaluation demonstrates that they can efficiently and accurately discover unknown recurring patterns in time series data taken from many different domains. Different data representations and motif models were investigated in order to design an algorithm with an improved balance between run-time and detection accuracy. The different data representations are used to quickly filter large data sets in order to detect potential patterns that form the basis of a more detailed analysis. The representations include global discretization, which can be efficiently analyzed using a suffix tree, local discretization with a corresponding random projection algorithm for locating similar pairs of subsequences, and a density-based detection method that operates on the original, real-valued data. In addition, a new variation of the multivariate motif discovery problem is proposed in which each pattern may span only a subset of the input features. An algorithm that can efficiently discover such “subdimensional” patterns was developed and evaluated. The discovery algorithms are evaluated by measuring the detection accuracy of discovered patterns relative to a set of expected patterns for each data set. The data sets used for evaluation are drawn from a variety of domains including speech, on-body inertial sensors, music, American Sign Language video, and GPS tracks.

Interesting: The State of the News Media 2008 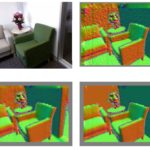